The word ‘kathina’ literally means ‘frame’, a type which was originally used for sewing  robes in a straight and orderly fashion. Today, this word refers to the special robe offering ceremony, arranged by the laity and offered to a group of four or more monks who have completed the three-month rains retreat (vasso). The offering must be completed within one month after the exit of the rains retreat, otherwise it is forfeit. Also, the robe material must be offered, cut, sewed, washed and dyed all in one night.

As Wat Bowonniwet is a royal monastery, the donor will always be the king. On this occasion, a beautiful golden frames the main Buddha image, the coat of arms at the upper, middle indicates that this curtain was given by King Chulalongkorn (r. 1868-1910) over one hundred years ago. This being an unusual year due to the upcoming cremation of the late king, the ceremony was held on Tuesday October 17, 2017, instead of the Observance Day directly following the end of the rains. His Majesty King Maha Vajiralongkorn arrived at the main chapel at approximately 4:00 p.m., offered the white cloth to the Order, before proceeding to Wat Arun to make a similar offering. 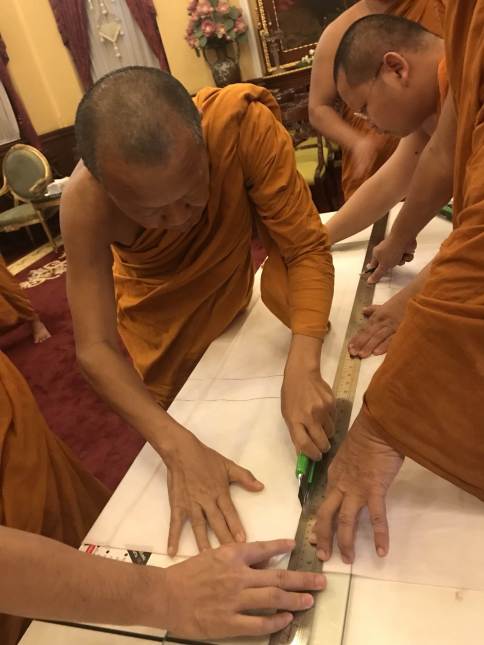 After the king departed, the white cloth was sent to be cut into portions, sewn, washed, dyed and dried. Some very talented women from the palace administration were present to help sew, as they do every year.

The new robe was finished and fully dried at about 1 a.m. All the monks who had spent the rains retreat gathered in the main hall and consented (anumodana) to the allocation of the new robe.

After all duties were complete, the monks chanted Pali passages, dedicating merits to the king. 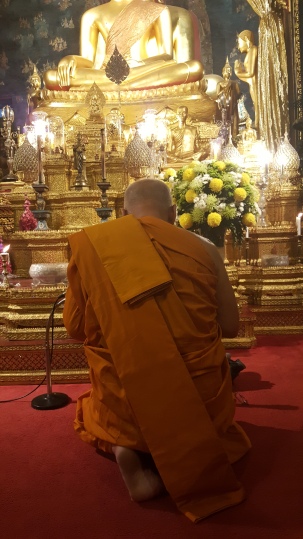