The eleventh of November each year marks the death anniversary of His Holiness Somdet Phra Sangharaj Chao Kroma Luang Vajiranayawong, third abbot of Wat Bowon and 13th Supreme Patriarch of the Ratanakosin period. This year marks the 59th year since his passing.

In his childhood, His Holiness was a royal page to H.R.H. Prince Maha Vajirunhis, first Crown Prince of Siam, son of King Chulalongkorn and Queen Sawang Waddhana. However, at the age of thirteen he ordained as a novice at Wat Boromniwat, with Phra Phrommuni (Muen, Sumito) as preceptor. He studied the Pali language, passing the fifth level while still a novice and received a fan of that grade from King Chulalongkorn, in 1894. He received higher ordination (upasampada) from Phra Phrommuni (Fang, Kittisaro) at Wat Makutkasatriyaram. He continued his study of Pali and passed the seventh level (there are 9 grades of Pali studies).

His Holiness was accomplished in many areas, however, he is best known for being the preceptor to His Majesty King Bhumibol Adulayadej (Rama IX) when he ordained in 1956, for a period of fifteen days, between October 22 to November 5. 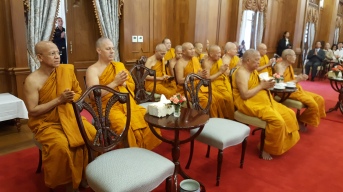 Today, in the 100 Year Sala, merit-making activities were conducted to dedicate merit to His late Holiness on the fifty-ninth year since his passing.

As of this posting (eleven days after the cremation) visitors are still arriving in great numbers in the sanctuary area, especially the chapel, where the late monarch’s ashes were interred in the base of the Buddha Jinasiha, the main image, on Sunday, October 29, 2017.

I foresee the numbers will remain constant until after December 5th, which was the late monarch’s birthday, and, because of that, Father Day in Thailand.

Many people, from all walks of life, are coming from nearby provinces to visit the crematorium, and I’m sure some of that number is coming to Wat Bowonniwet and Wat Rajbopit in remembrance of the late king who did so much for the country and its people.

Symbolism plays a large part in ceremonies in Thailand, and the cremation of His Late Majesty, King Bhumibol Adulayadej, is no exception. As a matter of fact, as the king is “owner of the land” (phra chao paen din) and everything therein, the symbolic aspect is even more evident.

Like the majority of Thais the late king was a Buddhist, however, the court tradition draws from Brahmin beliefs. To these ancient beliefs add the newer, western dimension of King as Commander-In-Chief. Therefore, the king could be portrayed as a Bodhisatva in the Buddhist perspective, an incarnation of Vishnu in the Brahmin perspective, and Head of State and Cammander-In-Chief in the Western perspective. All of these factors were present in the late king’s cremation ceremonies.

The working cog behind the first two perspectives is the belief in the Three Worlds Cosmology (Trai Bhumi), which places all unawakened sentient beings into three categories: Kāmaloka, or the world of desire. This world includes humans, the lower celestial beings (devas), various levels of hell-beings, hungry ghosts and animals. These beings by and large are motivated by Greed, Anger and Delusion; Rūpaloka, the various levels of Brahma-gods, and Arūpaloka, or the four formlessness realms.

This style of crematorium, known as a busabok, is reserved for the king, while the prasat style (celestial mansion)  is used for royals of a lesser rank. The protocol that dictates the decoration and materials used of each level of royal cremation is vast, too detailed to undertake for this blog. 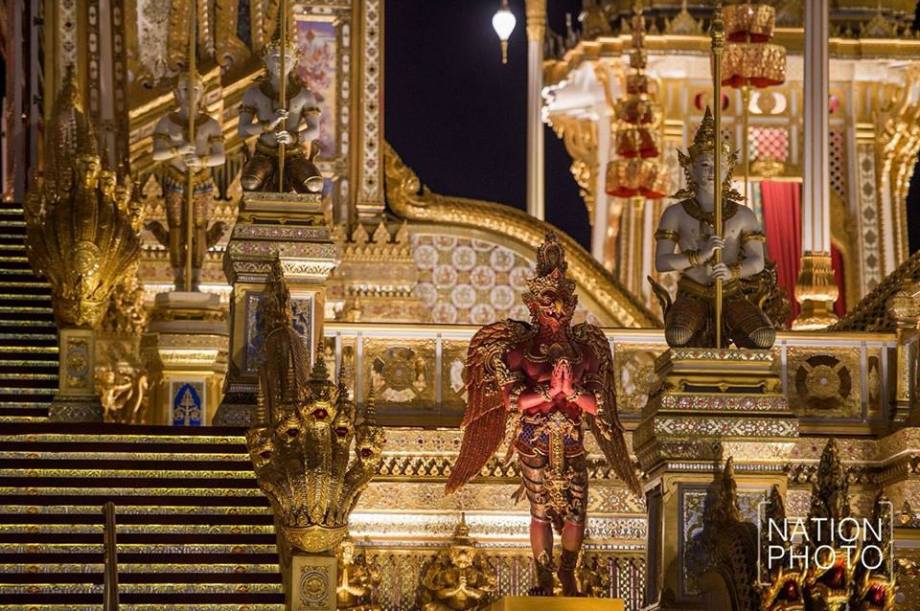 The crematorium has been populated with various mythological animals and gods, placed in their corresponding positions according to the Trai Bhumi source. Just in front of the crematorium itself is a pool of water representing Anotata lake. In this lake we can find the twelve kinds of elephants, serpents (nagas), horses and oxen. On the first level, facing toward the Sumeru, the cosmic mountain (crematorium) are the Four Heavenly Kings (catu maharaja): Kuvara, of Vesuvan (north), Dhataratha (east), Virulhaka (south) and Viruppakha (west). Kuvera is lord over the giants (yaksas), Dhataratha is lord over celestial musicians, Virulhaka is lord over the celestials (devas) and Viruppakha is lord over the serpents. There are many half-bird half-man figures (garudas) in various positions. According to Brahmin or Hindu lore, Garuda is the vehicle of Vishnu, and in this case, Garuda is taking Vishnu (the late king) back to heaven. [Interestingly, the Garuda appears on the royal standard flag attached to the king’s car, as if  Garuda is transporting the king, himself]. There are also kneeling and standing celestials holding umbrellas and sunshades, as well as naga balustrades. The late king’s dogs, Khun Tong Dang and Jo Cho, also appear in effigy, further personalizing this one of a kind crematorium.

The screens on the four sides of the busabok portray Vishnu, taken from King Vajiravudh’s interpretation of the story.  The panels below are decorated with paintings of His Majesty’s royal projects, each side equating to the four elements. For example, the project to prevent flooding known as Monkey Cheeks (kaem ling), represents the water element.

I have briefly explained the significance of Buddhist and Brahmin symbolism above,  leaving the western dimension of King as Commander-In-Chief. The level of dress uniform used by the members of the military, from the beginning of the procession out of the Dusit Throne Hall, up to the actual cremation, reflected the status of the deceased. The gun salutes as well as the gun carriage used to convey the urn from the royal chariot to the crematorium, symbolizes the king’s role as Commander-In-Chief. 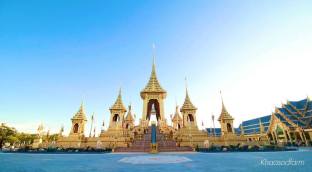 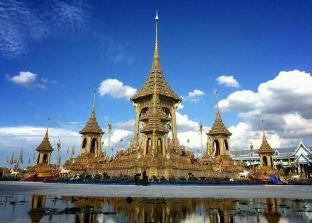 The title of today’s blog may be surprising, odd, or even out of place for some people unfamiliar with Thai customs. Visiting a crematorium is not high on most people’s lists of things to see. That is not true in the case of the crematorium used for King Bhumibol’s cremation due to its highly artistic, decorative nature. Crematorium used for past kings all draw from the traditional belief of Trai Bhumi, or the  cosmic map of the universe. However, not all of them will be decorated exactly the same. In the case of his late majesty, his crematorium was highly personalized to reflect the uniqueness of his reign. For example, the area to the front of the crematorium displays several of his royal projects ideas, dealing with his water aerator (which he received a patten), rice strains introduced, as well as a grass (yah faek) with long roots he introduced to prevent erosion causing land slides. The celestial and mythological figures (Himapan) are worth a visit in their own right. (I will post later with an explanation on the beliefs behind these figures)

Thai tradition dictates that once a royal crematorium has served it purpose it is quickly dismantled, as having a crematorium stand for a long period of time would be inauspicious. However, due to the detailed, grand artistic nature of this Meru Mas (crematorium), as well and the late king’s legacy, the Thai Government will allow visitors access to the site from 2 to 29 November. There is very little information available on visiting the crematorium exhibition in English, therefore, I

Each one-hour session will be decided into 15 minutes in the area simulating the royal projects for photos, and 45 minutes to independently visit the six building in the exhibition.

The exhibition is decided into three sections: 1) the Royal Projections, 2) construction of the royal crematorium, 3) royal history and royal activities.

Five access points to the site: general public via The Chang, the Tai Wang Junction and Mother Earth Fountain; Buddhist monks and the disabled via Dhammasart University, while foreign tourists vis the Ministry of Defense.

Only the first level of the crematorium is open to visitors, levels 2 and 3 are closed.

Thursday’s (26 Oct., 2017) long awaited cremation of Thailand’s beloved monarch has now been committed to the annals of history. The procession, conveying the urn from the Dusit Throne Hall to the crematorium, as well as the cremation itself, were executed with an amazing level of accuracy and care, unrivaled in this day of abridged traditions and cost conscious criticisms. The event was totally fitting for a king, who had dedicated his life to the uplift of his people and their livelihoods.

Friday morning (27 Oct., 2017) His Majesty King Maha Vajiralongkorn presided over the cremains distribution ceremony, wherein he bathed the bone fragments with scented water, and placed them in six jeweled urns. The first urn, the largest with nine-tier gold umbrella, will be placed in the Chakri Maha Prasat Throne Hall, along with those of the past eight Chakri kings. The remaining five urns will be given to H.M. Queen Sirikit, King Maha Vajiralongkorn, Princess Maha Chakri Sirindhorn, Princess Chulabhorn and Lady Ubolratana, eldest daughter of His Late Majesty.

Tomorrow, October 29, 2017, beginning at 10:30 hrs., The king will offer food the monks, after which, the urn containing the cremains will be installed in the Chakri Maha Prasat. 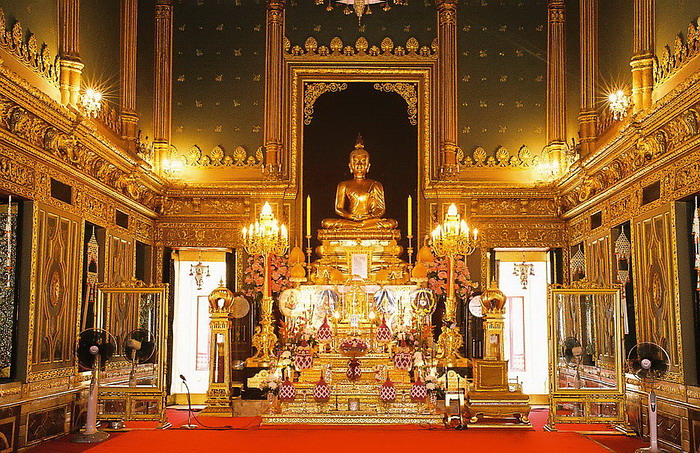 At 17:30 hrs. Princess Siriwanwari Nariratna will lead a procession from the Phra Sri Ratana Chedi in Wat Phra Sri Ratanasasadaram (Wat Phra Kheo) to Wat Rajbopit and Wat Bowonniwet, to inter a set of ashes in each monastery.  At Wat Rajbopit a portion of the ashes will be interred under the Phra Angirot, along side those of King Prajadhipok (Rama VII); at Wat Bowonniwet, under the Phra Buddha Jinasiha, behind the ashes of King Vajiravudh (Rama VI). This will officially end the mourning period.

In approximately 20 hours from now (17:30 local time, Oct. 26, 2017) the cremation of His Late Majesty, King Bhumibol Adulayadej, will take place. This is such a big event, and as I mentioned in an earlier post, the last cremation of an anointed king was nearly 100 years ago.

On the Ratanakosin island, especially around Wat Bowonniwet Vihara, the streets have been closed, no vehicles are allowed, only pedestrian traffic. The atmosphere in the temple is very busy, many volunteers have set up chairs at the basketball court, which will be used for placing the sandalwood flower, as well as watching the event unfold on a giant TV. People are also making food in the makeshift kitchens, which is sent to the mourners camped out at Sanam Luang and environs. 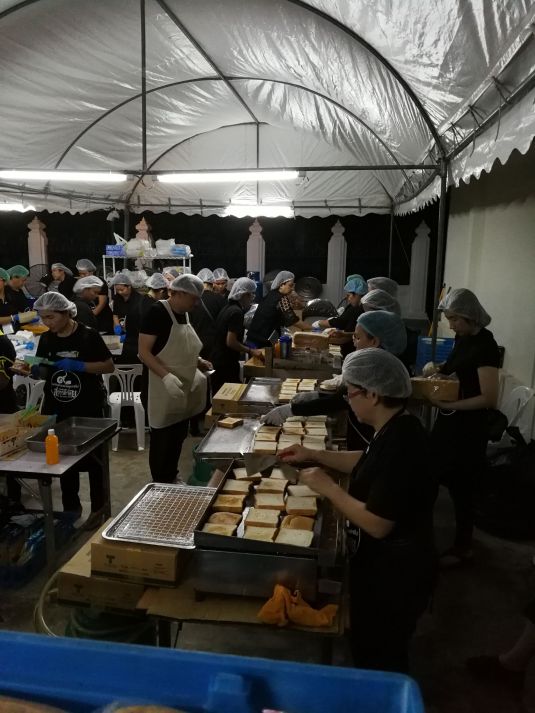 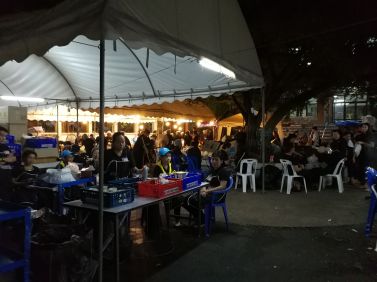 Also, due to His Late Majestie’s close ties to this monastery, many of the buildings he used when he was a Buddhist monk, residing here in 1956, have been lit up with spotlights. It is a very beautiful sight, indeed. I will include some photos of the lit buildings below. 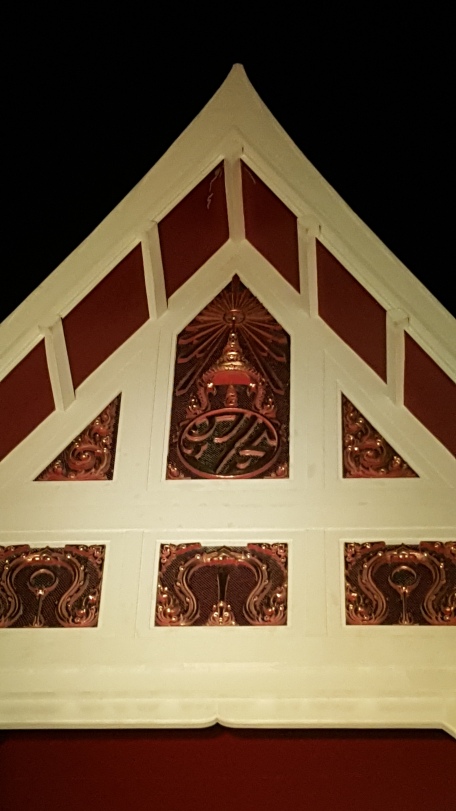 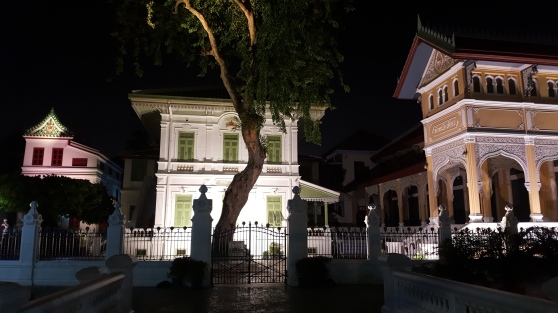 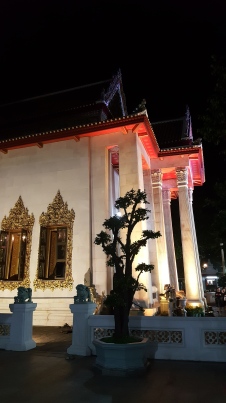 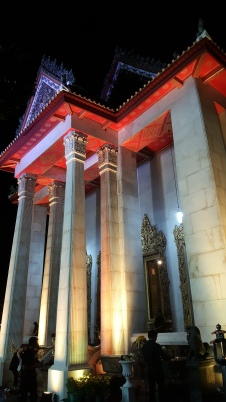 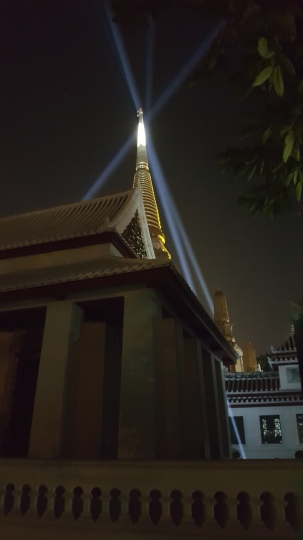 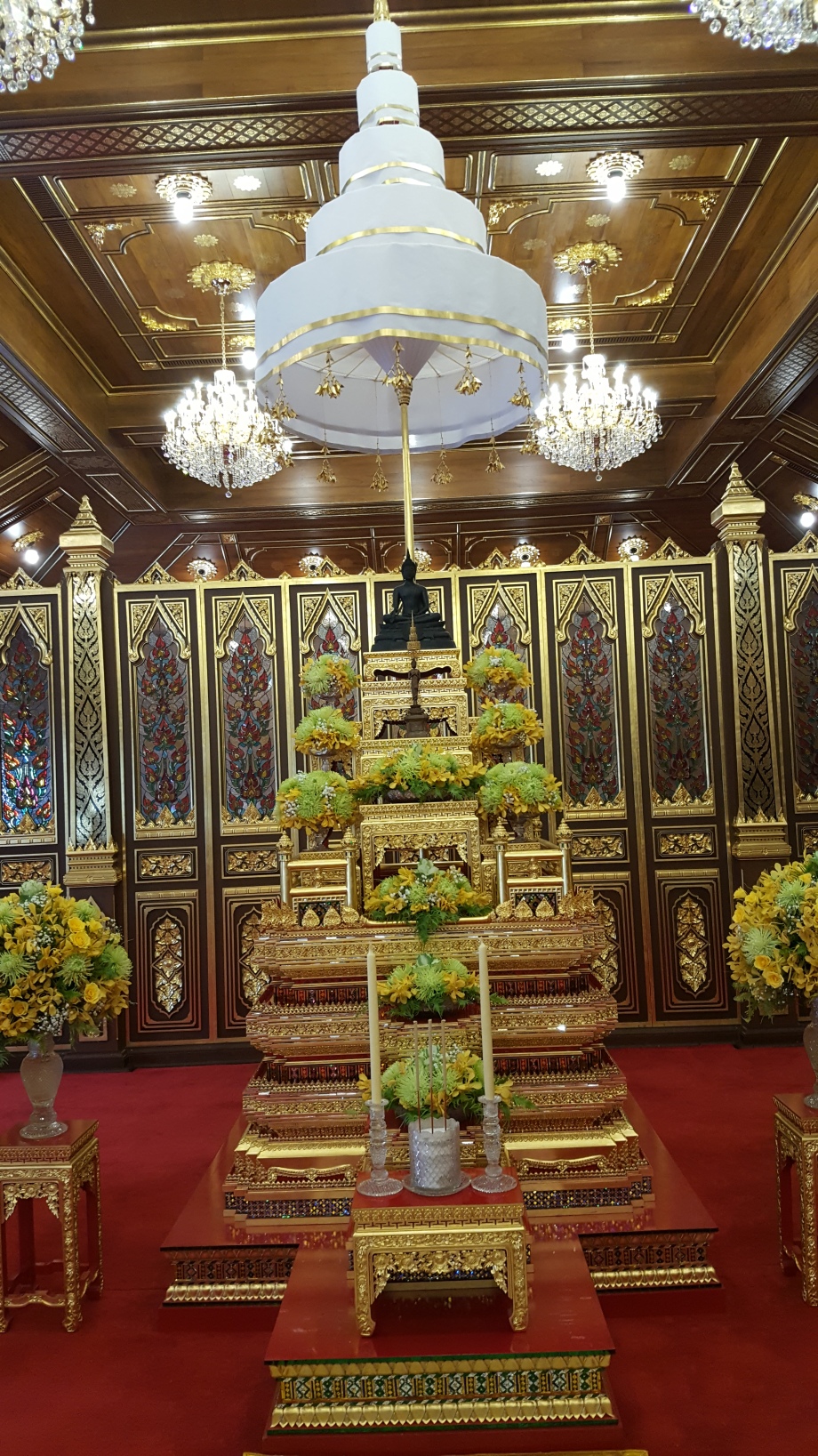 October 24, of each year marks the death anniversary of H.H. Somdet Phra Nyanasamvara, the 19th Supreme Patriarch of Thailand. Today was the fourth anniversary of his death; his age was 100 years and 21 days.

The event began with a Dhamma Teaching (Dhammadesana) by Phra Rajavedi of Wat Phra Chetuponvimolmangalaram (Wat Pho). Upon finishing, he was offered gifts, provided by the king, by members of the audience. 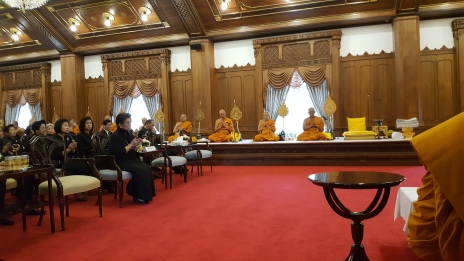 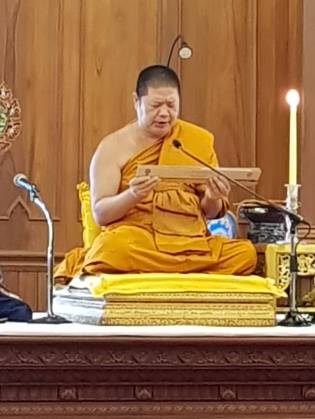 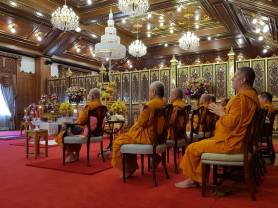 A Lunch was offered, after which, a robe offering (bangsukun) was offered to 20 monks. Merit was dedicated to His Holiness, marking the end of the ceremony.

It has only been four years since his passing, but for me it feels much longer. I continue to miss his presence and fatherly advice. With anjali and prostrations. 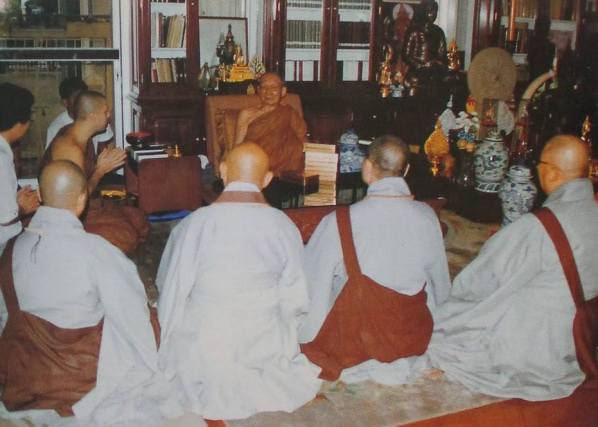